was two weeks ago and while I think it was the proverbial straw that broke the camels back in terms of my recent burn out, it was so worth it!!!!!!!!

Last year i didn't attend Coco at all and just showed up for one afternoon of shopping and visiting with a few friends. Which was nice but i also missed being a part of all the fun and chaos, so this year i attended the whole weekend and was involved in four major costume meet ups/ groups.

The first group was Friday evening for the Ice Cream Social, we did 18th Century Disney Princesses.

I was Rapunzel and we also had present: Belle, Cinderella, Merida, Ariel, Tinkerbell, Nala, and two Snow Whites :) This was a blast of a group as we are all good friends! 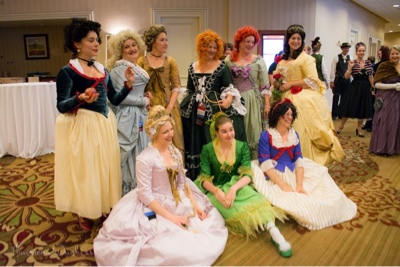 My sister takes all the credit for the wig I'm wearing, she did an amazing job kluging two cheap Halloween wigs together! 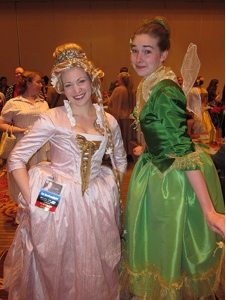 And because it matched the movie and we were inside on carpet the whole time,i went barefoot! Silly i know 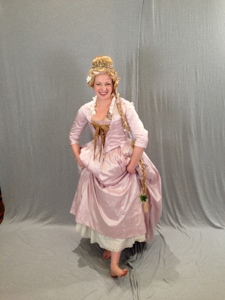 Saturday was breakfast and a few quick photos before classes as The Georgia Rockford Peaches. THis group was a blast and the costumes are so cute! I have a feeling we will be seeing this one again next year :) 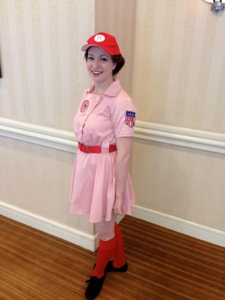 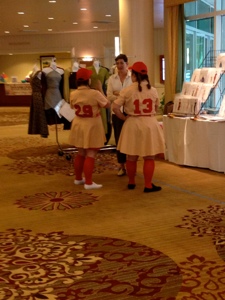 Then i quickly switched over to the 18th Century Curtain Along dress for that groups meet up in the afternoon. 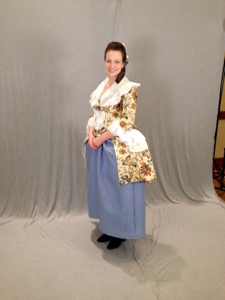 This had a great turn out and we had a nice range in dates of costumes as well as every color of the print represented! The best part was getting to meet so many of the other bloggers that i follow and had not yet met. We really do have a great community of wonderfully nice people who love to costume and any oppertunity to meet these people in person is great! 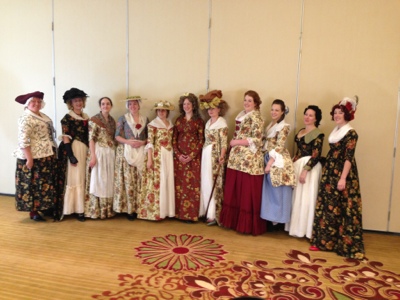 Later that evening for the Gala's red carpet walk in I had Michael come out and join me all dressed up in his 1730's Coldstream Guards uniform while i wore the Robe Battante. 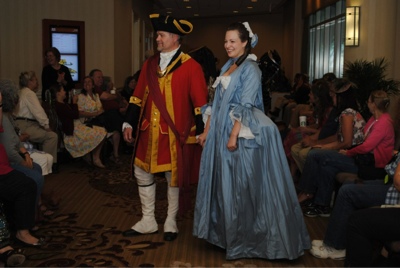 Even though we didn't attend the Gala i wanted to come out and see what everyone was wearing and to show off Michael's uniform to a bigger audience. That uniform was a HUGE undertaking and i am so proud of how it came out that i just couldn't resist another opportunity for it to be seen ;)

Sunday i went to a few morning classes in my Undies. I wore the new Dark Garden corset with the matching embroidered chemise. Then changed in to my Roman costume for the rest of the day as part of the "Bitchy Roman Lounge wear" group. The Roman robes were comfy and i was so proud of my hair (that i totally didn't get any pictures of!). 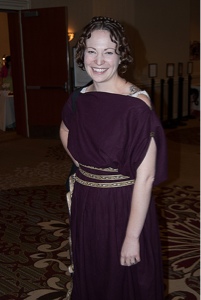 There were plenty of fun classes this year though nothing that really reached out and grabbed me as i didn't do any limited classes because i wasn't sure i could commit to the whole weekend till the last minute. As a result the whole weekend was really focused on meet ups and costume changes. Next year i like the theme better and therefore will likely like the classes more and so i want to try less dress up and more classes. (yes,please remind me of that last statement when next year rolls around and i am sewing like mad for multiple costume group meet ups!)
But my favorite part of Costume College regardless of what the theme is or what i or any one else wears, is the people. Those who come from near and far to share in the love of sewing. and every year i walk away with new friends :)
Posted by Cait at 4:18 PM