Since the main source of information and online tutorial for making a soft crown regency poke bonnet comes from The Oregon Regency Society  I figured that's where I would start. So I decided to try their regency poke bonnet tutorial on an old straw hat I have. The brim on that hat is smaller then I would have liked but this is a first attempt so it's a learning experience.
Following the tutorial step by step I started by marking where to cut my hat in half, then cut it ( measure twice, cut once). Okay maybe more then once, as it needed a little shaping at the edges to make everything smooth and shapely. 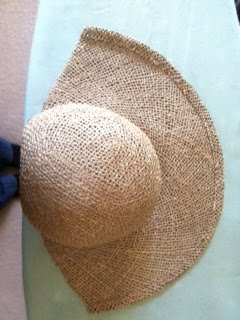 Then came the binding of the outer edge. I chose to use the same fabric as I was going to use on the crown which was the chocolate wool for my spencer jacket. Some folding and ironing turned it in to bias tape.

I glued the bias on with fabric glue because the weave of my straw was too thin and spaced out to successfully sew through to start. As I put the bias on I also incased in hat wire to wire the brim and give it structure. I'll go back at the end and hand stitch down the edges of the bias for added security. 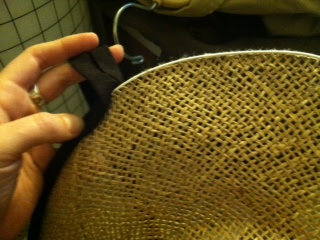 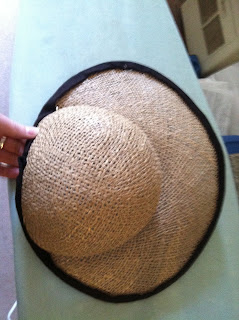 I made the bag for my crown out of the wool and cut the length as twice the circumference of the crown so that I had fabric for gathering. I cut the width of the bag too tall initially and when I tried it out it was too baggy and droopy due to the weight of the wool so had to trim the edge down till it measured just an inch higher then the actual crown and that worked out perfect.
I set a two inch band of wool around the crown at the edge of the brim. I think it helps hold the structure and gathering of the bag while also giving it a finished look. 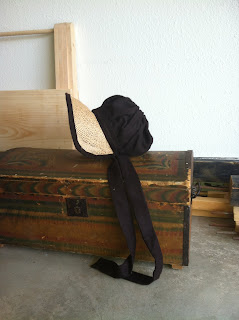 I made my ties out of the wool as well, and they are about two feet long.

The bonnet is kinda plain, which is okay  as I think it will look really good with the new printed linen dress that already has that more "homespun" look. And the bonnet will match the Spenser jacket perfectly :)
All in all it was an easy to follow tutorial and I am happy with the results. So I would totally recommend this to anyone. No need for fancy sewing skills just a little bit of a craft nature should do the trick. And the whole thing can be accomplished in an afternoon.
Posted by Cait at 11:39 AM