Three weekends ago Michael and I attended the "old fort Mac days" event at Fort McArthur. The event was a two day gathering of all military reenactor's from Vikings to desert storm and everything in between. There were lots of WWII groups and plenty of civil war, even some revolutionary war. My favorites were the rev war groups but that's probably because I had so many friends in them :) 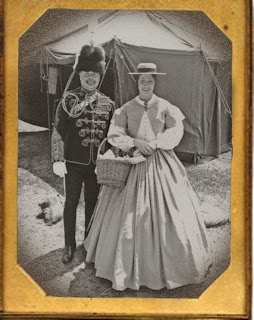 Michael chose to wear his most impressive uniform: the 13th hussars full dress kit, it's an original from the 1880s and he has every piece for the kit including all the other modes of dress. It usually only gets worn at the SF dickens fair, so taking it out into the daylight was fun and a rather spectacular sight.

In the afternoon as it got much warmer, he changed into the Indian service kit for the 13th hussars. It's so good looking with the bright white coat and the gold accents and that pith helmet. 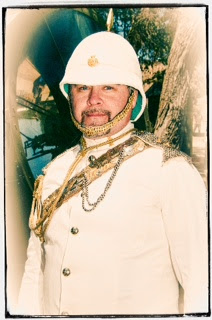 Just to make my life easier I wore one of my 1850s gowns, it's the era of dress I wear with him at dickens so it was easy to put together. All the pieces I had except for the little bolero which I threw together the week before using a truly Victorian pattern. I was really trying to aim for this look: 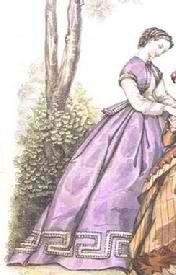 I didn't have time to embellish the dress so that will be for another event, but the general style is there I feel like :) 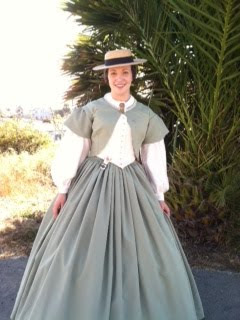 My favorite part of the outfit, aside from the sweetheart badge I wore for the 13th hussars, was my hair. Using a fake bun and lots of braids in my own hair, I was able to create that very severe hairstyle that was so popular. 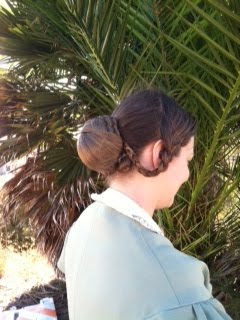 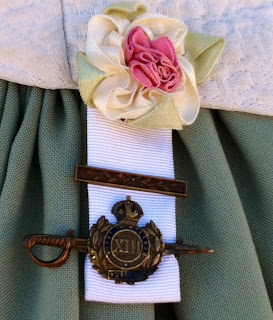 Unfortunately there aren't a whole lot of photos to share. We were so busy having fun with our friends that I didn't take any pictures :(

But Michael and I plan to do the event next year so maybe more then. We really want to camp out next year and set up a "british officer on campaign" camp, it would ridiculously extravagant and oh so much fun :)
Posted by Cait at 3:07 PM