I really wanted a new sewing kit for Dickens this year, last year I had a small sewing basket that quickly turned into a disaster during the run of fair. My original idea was to collect and compile a chatelaine with the sewing tools I would need but though I have been able to gather a few pieces here and there, there is still too much missing to make it a useable kit.

The next idea that I have gone with came from a blog that I follow: Dressed In Time (http://dressedintime.blogspot.com/?m=1) is a wonderfully fabulous blog mostly focused in the 18th century though she does do a little bit of everything else and she is an amazing seamstress.

Earlier this year she made herself a beautiful silk and embroidery sewing kit, based on an original 18th century one in a museum.

The kit is really much like a book with an inner pocket for tools, a felt for holding needles and a little pin cushion, that folds and ties closed with a ribbon. 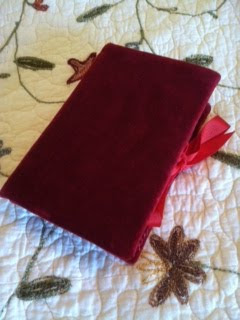 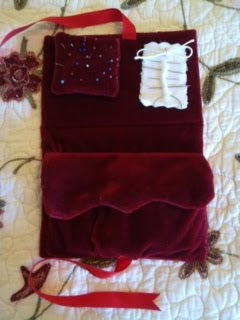 I followed Dressed In Times directions closely from her blog, using cardboard to stiffen the sides, adding a drawstring to the pocket, and closing it with a ribbon tie. 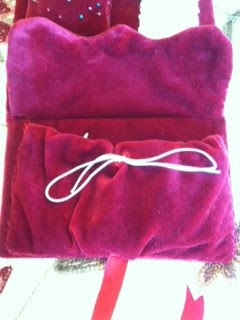 I didn't embroider mine for three reasons: one my embroidery is awful, two i made this out of a silk velvet with a rather tall nap, and three I did the whole thing in a few hours over morning coffee. Most of it was hand sewn together with just a few pieces set using the machine. I made it the size of a standard paper back book so it fits nicely into my basket or for now into my purse.  In it I can carry needles, pins, small scissors, a seam ripper, a few thin spools of thread, wax, and my ever handy bag of safety pins. 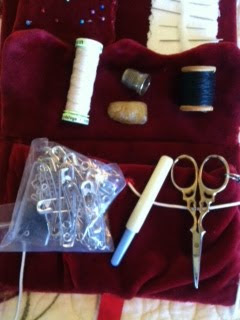 I am so happy with how the little kit turned out! And am already using it for sewing I am doing now in preparation for Dickens (yes i sit and sew during my lunch at work), it's easy to take, doesn't take up too much room and is already stocked with everything I need.

I take absolutely no credit for this project and give all due credit to Dressed In Time for both inspiration and idea, she solved my sewing kit problem with her project and provided direction on how to make it. Thanks!!
Posted by Cait at 8:42 AM