This last weekend was the official start to Michael's big 18th century project. We are copying a portrait of a British Coldstream Guards officer from 1738. 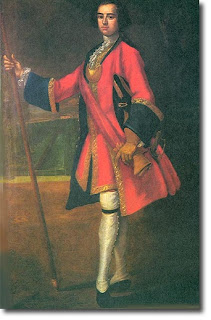 We actually started this months ago by collecting patterns and deciding on the raw materials and making mock ups of all the pattern pieces, which was a very good idea becasue there was a lot of pattern modification to get the exact look we wanted. But then the project got held up waiting on the most crucial piece, the red wool that the whole uniform was to be made of. But finally it arrived last week so we took advantage of the three day weekend to get as much of the large construction done as possible and now, while still behind schedule, at least the project is back up and running and looking to finish on time. As in ready to wear in three weeks!
I will be breaking this project up in to many posts over the next few weeks as its that big :)
Posted by Cait at 3:19 PM