So over the weekend I was able to finish both the skirt with its ruffled and ruched trim and the overskirt with its bustling and lace edging. Now did I take pictures of the wonder that was hours of pinning and futzing and hand sewing? Of course not ;) so those will come later as the majority of the dress stayed up north for the weekend ( FYI, really hard to transport a period gown with all it under pinnings and accessories in a single garment bag on the train :)

I did also get the bodice constructed and brought it home to finish trimming it and put in the eyelets up the back. This is a look at it constructed and starting to get trimmed. 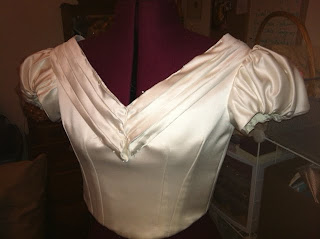 The sleeves are from an Ageless Pattern, of which the dress was mediocre on me but I loved the well formed poof the sleeves made. So out went the rest of the pattern and the sleeves live on, incorporated into other patterns :) The bodice is a Truly Victorian pattern that I had previously had fitted and that I modified in front from having a deep point to a very subtle front curve. I chose a subtle curve over a perfectly straight line, as it would be more flattering to my very short waisted body, yet still maintain the same look.
An easy distinction between the two bustle eras was the propensity for bodices that were straight along the bottom for the first bustle era and pointed for the second. Here are a few examples of fashion plates I used as reference for this. 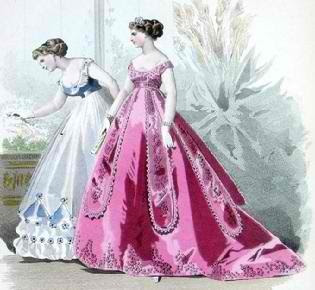 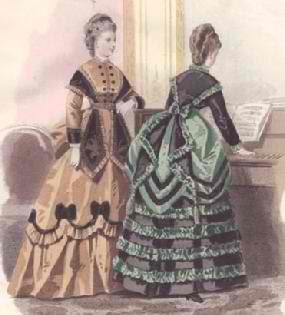 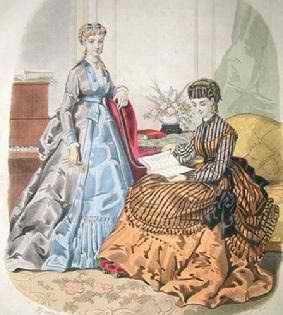