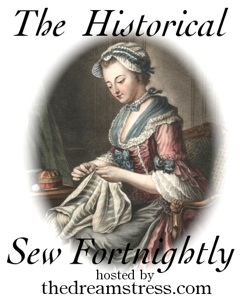 The Challenge: "Channel your inner princess and her royal wardrobe. Pick a princess, queen, empress, arch-duchess, or a de-facto queen as inspiration for a fabulously royal frock (or other garment). The occasional prince is also most welcome."

I chose to channel my inner Disney princess and made a dress to wear for an upcoming event of 18th Cnetury Disney princesses, I am going as Rapunzel. I wanted to make a dress that would work for that event but also be a perfectly acceptable 18th century dress for use at other events. So here is the dress sans accesories and embellishment that will make it look more like Rapunzel. 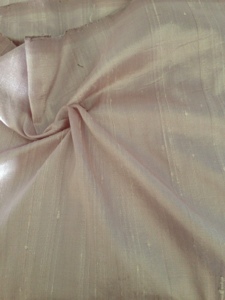 Pattern: The JP Ryan Robe A L'anglaise a la Polonaise 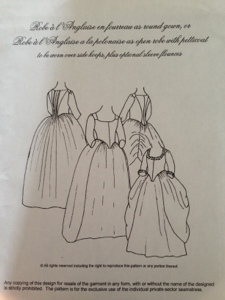 Year: i went with a bum pad rather then side panniers and am trying to go for the later 1770's look 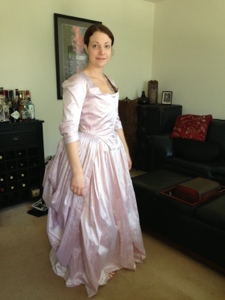 Notions: two big covered button forms for the Polonaise ties and some bias tape for the petticoat waistband 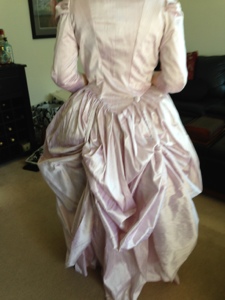 How Accurate: I will give the dress a 7 out of 10. Material and pattern are all period correct but the constuction was all on the machine so lost points there. I am really happy with the look of the dress for the 1770's style, as for making it look like a Rapunzel dress that is still up in the air as i am still putting together some embellishemnts to help that along . . . 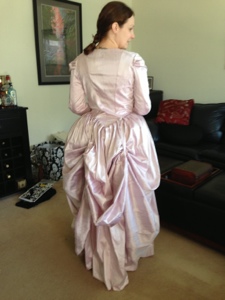 Hours to Complete: roughly 8 hours from cutting out to finished sewing. Doing everything on the machine makes it go very quickly and for some complete freak accident i didnt have to hem the entire dress so that saved a lot of time setting and then sewing. I still have some fitting issues to attack and the front closure to finish for it to be fully complete.

First Worn: not yet, its planned for a group event a Costume college at the end of the month.

Total Cost: the pattern i already had, so it was just the fabric which i remember being about $8 a yard. so lets say $64 total.
Posted by Cait at 11:41 AM