Last weekend out in Long Beach CA was the event Old Fort Mac Days at Fort MacArthur. This is a long running and much loved event by locals and reenactors alike! This is the second year Michael and I have visited the event, while we have many friends in many different groups we have not participated and chose to just dress up and visit for one day and see all our friends and all the great camp set ups.
The event is funny in that it is a military reenactment for every military and engagement in history from the Roman Legion to the Vietnam War and everything in between. Its fun in that you can walk from one camp to the next and go from WWI trenches to an 18th Century cook tent.
Michael likes the event as it allows him to wear uniform that he doesn't have regular events for already (he has a lot of Uniforms from many different British regiments and a wide spread of years). Last year he wore his 13th Hussars full dress kit which is only ever worn when at the SF Dickens Fair so it was very neat to see it out in the bright light of day. And then i just wear a dress that is of the same era as the uniform he wears :) Last year that ended up being one of my many 1860s hoop skirt dresses. 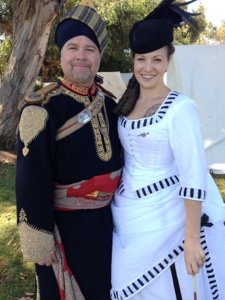 The regiment, though British, chose to adopt the Indian style for their full dress uniform when present in India. So the uniform is a long Kurta with very elaborate gold bullion embroidery worn over white riding breeches and tall black riding boots. The headdress is a turban tied Punjabi style and the uniform is worn with a cross belt, wide waist sash and waist belt for the sword.

The majority of Michael's uniform is a very well done reproduction with the exception of the cross belt and all of its silver fittings, the belt buckle and the sword which are originals from the 1870's.
Needless to say the uniform was very impressive and grabbed a lot of attention as it was the only one of its kind at the event and people were trying to figure out what is was, when it was, and where it was from :) It was fun to follow along in his wake and listen to him provide explanations and details, as he really is very knowledgeable about all the regiments and their history that he has uniforms for.

I wore the dress i posted about last week that i made the new petticoat for. With my favorite perchy black hat and white parasol i thought it gave a good impression of an 1870s lady in India :) 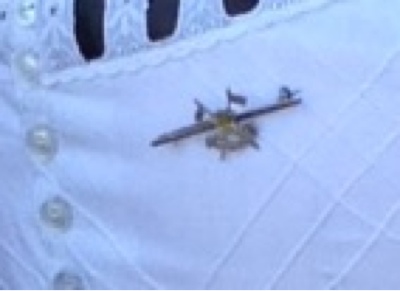 It's hard to really see in the pictures but I am wearing a sweetheart pin for the Probyn's Horse regiment! I now have a sweetheart badge for every major regiment Michael collects, it's a lot of fun :)
The weather was beautiful and we really enjoyed visiting all our friends in all the different camps and we had a very lovely picnic lunch in the afternoon sitting up on the upper lawn in the shade of a tree looking out over the ocean to Catalina Island! 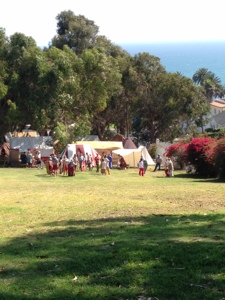