Notes from the first quilted petticoat

The first "quilted" petticoat I made was a test of the pattern I had, but I didn't have enough fabric so it was very short and ended up just getting scrapped so I won't really count it. 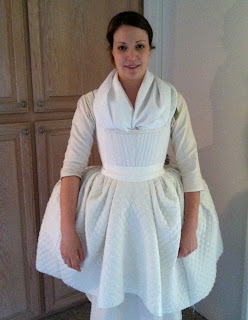 The real one came shortly after that first practice, but instead of using pre quilted material I made it out of a yellow matalaise. The fabric was perfect with the overdress and still had a stiff drape. 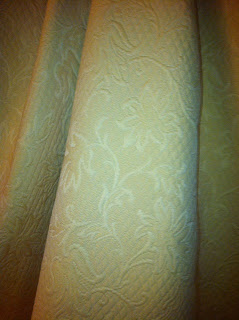 I used the petticoat instructions from the JP Ryan pattern I made the dress from and while it worked I wasn't totally happy with the outcome. The waist band was too wide for starters ( my fault I can't do math ;) but also after conversing with my Aunts who do a lot of 18th century I realized that there was a better and easier way to set the closure on the waistband. 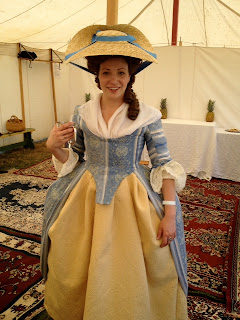 So while I intend to go back to that petticoat and fix it accordingly, i did incorporate this other way into the new "quilted" petticoat that I am using for the HSF challenge #3.
Posted by Cait at 10:41 AM