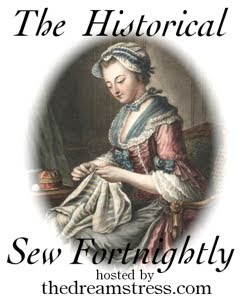 Challenge #5: "As wonderful as making pretty, pretty princess dresses is, the vast majority of people have always been poor commoners, whether they were peasants working the land, servants in big houses, or (later), pioneers carving their own space in new lands. This fortnight let's make something that celebrates the common man."
For this challenge I chose to make an 18th century mob cap because regardless of class every 18th century girl needs one :) 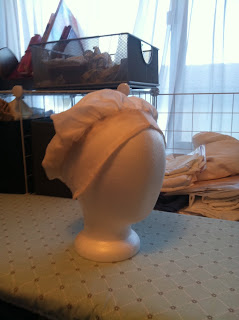 Fabric: very fine cream linen, from the stash.
Pattern: no pattern, I just made it up as I went based on pictures and extant pieces. This was actually not a good thing as I really don't like the look of my cap, and I think a real pattern would help me like the cap better. Next time I make a cap I want to try the JP Ryan pattern
http://www.jpryan.com/caps.htm
Year: 18th century
Notion: just thread.
Historical Accuracy: I'm going to go wild and give this a 9 out of 10 and that's because of the fact that I completely hand sewed the whole cap and the materials are accurate for the period. So even though I don't like the look of the cap, the materials and construction are accurate for the period. 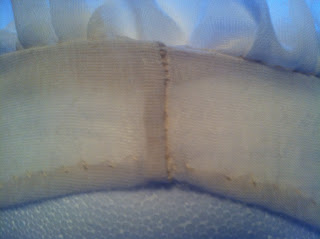 Hours to complete: 6 from cutting out to the last little stitch.
First worn: not yet, might not ever get worn if I really hate it enough and end up making a better one with a real pattern ;)
Total cost: $0, all from the stash!
Posted by Cait at 10:07 PM