Since the last post was about a teens era event i thought I would finally post the project notes from making my teens era "Lady Mary" style hat. This was made last year for all the titanic events but it just never made it up, so here you go: 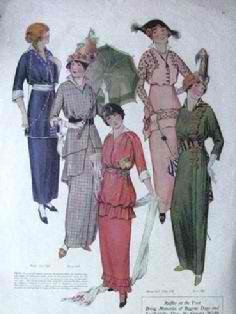 I chose to attempt to make a small style teens hat rather then try to find an original to buy ( nearly impossible, or too expensive). I chose the small style rather then the more obvious very large wide brimmed hats that dominated the edwardian era. The two main reasons being: one the event was a dance and a large hat would be in the way and two I had just finished watching season two of Downton Abby, in which Lady Mary is often seem wearing a red walking suit with this matching hat. 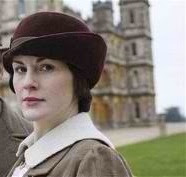 So for my navy blue wool walking suit I would make a wool felt hat to match.
Since I was working with only what I could find in the sewing room and around the house. I took a modern wool felt cloche hat purchased previously from Target, for some other event, and removed its grosgrain ribbon hat band and ripped out the stitching that had the edge of the brim rolled up over a thin plastic wire. 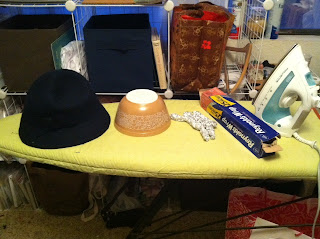 My tools for shaping the hat were: a glass kitchen bowl about the same size as the hat, tin foil and my iron. 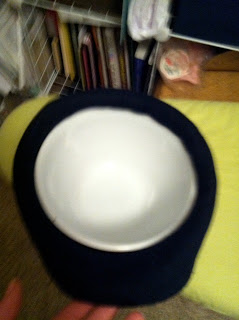 I used the bowl to hold the shape of the crown when I rolled the brim up. I only rolled about 3/4 of the brim up, leaving flat one side and the rest sloping up. The tin foil I made into rolls about an inch or so in diameter that I placed at the base of the crown between rolled up brim and crown, this was to help maintain the "rolled" bottom edge as I steamed the hat into shape rather then have it squish flat and create a sharp crease.

Next was lots of steaming and squishing and steaming and readjusting and steaming and rolling and steaming and . . . Well you get the idea. The shaping took lots of fussing, but eventually I got it into a shape I was fairly happy with. Though at that point the brim was far too tall so I had to trim it down till I thought it was proportional and mostly resembling the Lady Mary hat. NOTE: measure twice and cut once! Or even better start with a small amount and then shave it down little by little so you don't accidentally take off more then you would have liked, because you can't add it back on ;) this is how it looked at the end of all that. 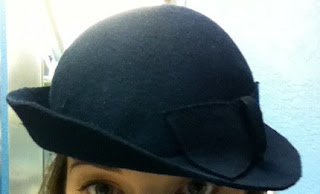 Later I added the original grosgrain ribbon back in as the hat band and trimmed the edge of the brim with matching bias tape to even the edge out. The hat came with a matching felt bow which I left on as the only accent on the hat, it was simple yet elegant detail, that I didn't have to create :) 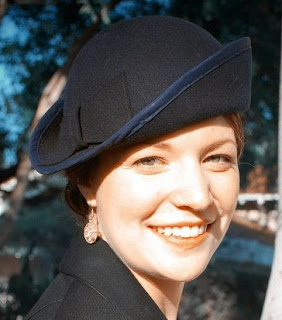